"Good job getting here. Told you not to, didn't I?"—Cheshire Cat 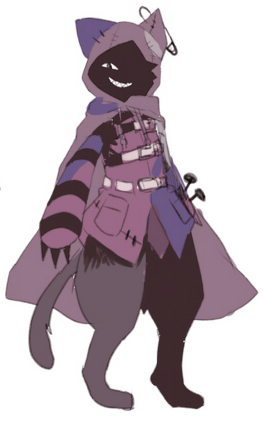 Cheshire Cat (チェシャ猫, Chesha Neko) is one of the guides in the World, the other being the White Rabbit.

His theme music is called "Murdered".

Cheshire hides his face underneath a hood that has cat ears attached with a large safety pin piercing the left ear of his dark purple cloak.

He wears a purple outfit with three belts wrapped around his chest. His arms are that of a cat's, both of them striped black and purple ending in three sharp claws and the left one has two nails protruding from the back of his paw. From the waist down, he has the lower body of a black cat complete with a tail.

His appearance without a hood is a that of a young man with short messy white and purple hair topped with a pair of black cat ears. His left eye has a black sclera and yellowish pupils while his right eye is completely black. Part of the upper right side of his face is also stitched with a red patch of skin.

The Cheshire Cat is very deceitful, malevolently playful, and enjoys the sorrows of others. He has a perpetual grin on his face and he could make a promise and break it in a heartbeat. He also enjoys playing around with people and their emotions and mental scars for his own amusement as much as he does it to induce them to despair so he could eat their souls. He doesn't seem to view people as any higher than an ant or a frog.

He has a tendency to speak in riddles about things concerning the World that brings up as much questions as answers.

The Cheshire Cat is the one who lures Allen into the World and serves as a bit of an antagonist throughout the game.

Allen first encounters him after he investigates the rumor about voices coming from the second floor. Upon returning, Cheshire, in the form of a black cat, leads Allen into the closet. From there, he makes several appearances, his entrances often sudden and startling.

He shows up in front of the sign post in the central area after Allen returns the Keys to the White Rabbit upon each World's completion. Should Allen keep answering "Not sure" to his questions, he'll keep appearing until the fifth door is unlocked. If not, then he'll stop coming.

He tries to lead each child's soul to despair in order to eat them since both he and the White Rabbit depend on souls to survive and though they could eat the souls of animals, human souls taste best. Adult souls are no good because they're full of knowledge while children are more naive and it's easy to crush them if one knows what to take from them.

Community content is available under CC-BY-SA unless otherwise noted.
Advertisement